According to the Keto community and Urban Dictionary: When dieters go from weighing two or three hundred pounds down to 199 or less, they have reached Onederland.

I have been following the Keto diet since January 8, 2018, with a few small breaks in between then and now. Today marks roughly 28 weeks of Keto and a weight of 197.7lbs, Onederland at last!  I do not have a good starting weight, but according to my doctor’s office, my heaviest weight last year was 254lbs, this means I have lost around 56lbs.

I am planning to continue my Keto journey until my birthday on August 5th. I am planning to take the month of August off and see if I’ve developed enough healthy eating habits to keep the weight off without being so restrictive. August 5th is also my birthday, and who isn’t going to eat cake on their birthday? The biggest things I’ve learned through this process are that I do not need to have so many snacks throughout the day. I do not need to have 2nds and 3rds at dinner, I am fully satisfied with a single serving. I do not need to have full sugar soda, I am perfectly fine with either zero or diet. I have definitely not given up my soda addiction as a part of this process.

The journey has been long and difficult. I really like bread and most other carb-ridden things. But who doesn’t? I don’t like fish, so my diet has basically consisted of the same couple of food groups for 7 months. Lots of eggs, chicken, steak, bacon, salads, and bunless burgers. Eating out has been hard, as a lot of local Grand Rapids restaurants do not offer items that are Keto friendly without modification. I know a lot of people in the kitchen/service industry so I try not to be difficult or ask for too many customizations.

For the first time in a long time I can say I weigh less than 200lbs and my blood pressure is normal. I feel so much better too! My mood is improved, I am sleeping better (for the most part), and I have more energy during the day (no more after work naps). I am still overweight and I would like to get down closer to 160-170, but I feel this is doable considering the great progress I have already made.

If eating a standard American diet in moderation does not continue to help me lose weight, I will just have to accept the fact that my body was designed for Keto. I am also planning to incorporate more exercise, which is something I have always been terrible at. All of my current weight loss is pretty much exercise free.

I will see where August takes me. With my birthday and a good friend’s wedding one weekend after another, there will probably be some overindulging, but that will no longer be the norm.

For now, I am signing off and I will see what August and September bring me.

Here are some progress pictures I found: 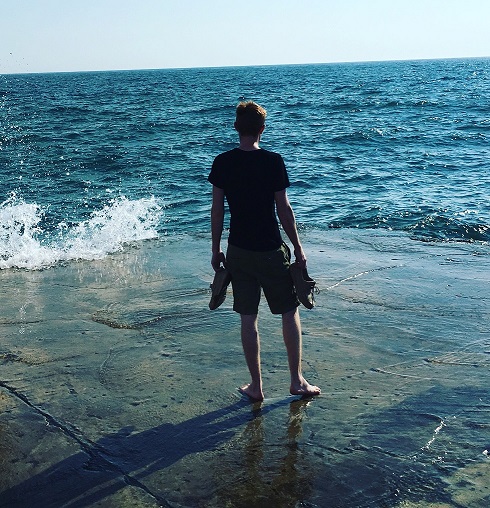 I had a fantastic Labor Day Weekend. I did something fun everyday this weekend.

Friday: I did have to work on Friday, and I’m not sure I should count it as part of my weekend. But I did try dinner at a new place, Shot’s On the River which was quite delicious and the portions were huge for the price.

After dinner I watched an episode of Stranger Things with my good friend Ian. I’ve already seen it all the way through, but he was watching it for the first time.

Saturday: I went to lunch with Cameron and Ian at the new Chinese buffet Fuji Buffet and Grill. The food was actually pretty good quality for buffet.

After lunch we went to Meijer as we both had a couple of things to pick up independently. Once we were done shopping Cameron had to go to work and Ian went to play D&D with some other friends.

While Cameron was at work and Ian was at D&D I watched a few episodes of Mad Men. I have been re-watching Mad Men from the beginning and have found it quite enjoyable.

Cameron got out of work around 8 and I met him downtown for dinner. We went to Two Beards deli and then headed over to Pyramid Scheme to grab a couple of beers and play some pinball.

After Pyramid Scheme we went back to the apartment and watched an episode of Stranger Things with Ian.

Sunday: Tana’s finance Beau and his brother Brock invited Cameron, Ian and I over for a barbeque. We went to Target to grab some snacks and beer to bring to the barbeque.

Beau made burgers with all the toppings. There were S’mores, hammocks, and bocce ball. Brock also made up his own version of Name that Tune which was quite fun, but some of the genres were kind of tricky.

After we got back to Grand Rapids Cameron and I made another Target run. This time to pick up some tonic water for vodka tonics, ice cream, and we decided on Lunchables for a snack.

We watched another episode of Stranger Things and then I went home to bed.

Monday: I slept in pretty late, and then did some chores around the house. Once that was done I called up Cameron and Ian to see what they were up to. They weren’t doing anything so I suggested we head out to Grand Haven for the day.

Our first stop was Oddside Ales. We had a beer there and grabbed some food from Mr. Kozaks, we also played Coup.

After our beers we decided to walk the Pier which is where the header photo was taken. It was pretty windy on the pier and the waves were really kicking up.

Once we got back from the Pier we checked out Grand Armory Brewing which was pretty cool. While we drank our beers we played Batman Love Letter which is a pretty stupid game, but I won.

After Grand Armory Brewing we headed over to Pump House for frozen yogurt. I got chocolate covered Oreo yogurt which I added crushed up Oreos, chocolate chips, peanut butter, whipped cream, and a cherry to. It was very tasty.

I drove Cameron and Ian back home and now I’m relaxing while watching more Mad Men. All in all a pretty fantastic long weekend if I do say so myself.

How I have not written a blog post in almost 2 years? Quite a bit has changed in 2 years.

Those are just the highlights. I’m positive there are tons of other things I cannot think of right now.

In addition I came up with a new URL for this blog, and changed the software it runs on. Hopefully I can start being more consistent with updates again.

I am making this blog post to keep myself accountable. Starting today I am counting calories via MyFitnessPal, my daily goal is to be at 1,610 calories or slightly less. According to MyFitnessPal this should net me a weight loss of 2lbs per week.

I am doing my best to completely cut out pop and other sugary beverages, I plan on buying some Crystal Light in order to satisfy my beverage fix. But for the most part I would like to focus on drinking more water.

I have been overweight for pretty much my entire life (or at least what I can remember of it), and I am tired of it. I want to look good in my clothes, feel confident in my own body, and not feel embarrassed when other people see me with my shirt off.

I may never have abs, or muscles to speak of, and that’s okay. I simply want to feel, look, and be healthy.

Things I didn’t want to do today:

What did you want to do today that you didn’t accomplish?

I got my car insurance bill a week or so ago and my premium has gone up roughly 100 dollars. I have no idea why, and an explanation is hard to come by. I haven’t changed, my car hasn’t changed. I’m getting older, and so is my car, my insurance should be going down.

After roughly 1,000 emails with my insurance agent, I think I finally have it straightened out. So sick of having to shop around for car insurance every 6 months. Why can’t we be rewarded for being long term customers?

Next weekend I might even try going to a movie, in a theater, by myself. That should be an interesting experience.

Inspired by my friend Jacqui I’ve decided to try and pick this thing up again. She taught me through her own blog that it doesn’t matter what you write, as long as you write something.

Whether it’s short, sweet, and to the point, or long and drawn out. Just write something. There’s no need to feel bad if you don’t post every day, this isn’t a place to be judged. This is for me, and no one else.

After HopCat we headed across the street to Buffalo Wild Wings, and asked for a table for 20. They told us the wait was a half hour, so we decided to get a drink at the bar. Brian bought my drink at the bar, I definitely owe him one now.

We finally got seated and I ordered another drink plus two shots of goldschlager. One shot for me and another for the birthday boy. I love goldschlager, something about the heat just helps set off everything else you’ve drank. However, Buffalo Wild Wings doesn’t really know how to mix a drink so there wasn’t much to set off. I finished out the night by ordering a long island iced tea, I figure that’s all alcohol they can’t really mess that up.

After finishing up at Buffalo Wild Wings we went back across the street to Grand Rapids Brewing Company. I just ordered water since I had already told my ride to come pick me up. Partly because I was tired and partly because Rachel and Phil were the only ones left out that I knew. I don’t do well partying with people I don’t know. I’m always worried that I’m going to embarrass myself somehow. Even though I’ll probably never see these people again.

After I got home I played around on the Internet and passed out. I woke up this morning around 11am and grabbed some food. I watched a couple episodes of Fringe and then decided it was time to head home.

After getting home I decided it was time to finally clean my apartment. I stopped at Kroger to grab a couple of cleaning supplies. It took me a couple of hours, but I managed to clean every room except for my bedroom. I plan to clean the bedroom tomorrow, but that might not happen.

After cleaning, I realized I was starving. I didn’t really know what to eat so I just grabbed McDonald’s. The only thing I knew I really wanted was a fountain Coke. I love fountain soda it just tastes so much better than canned or bottled soda.

After finishing dinner I went back to watching Fringe and relaxing. Tomorrow is my first day back to work after having five days off. At this point I kind of don’t want to go back, at least it’s another short week.