Damn this thing is beautiful, I know there is a love/hate relationship with the keyboard, but I love it. The color/finish is fantastic, the larger trackpad is amazing, it is light, portable, and thin, yet powerful enough for anything you throw at it.

My thoughts are that if you need a new MBP that you definitely get the 2016 model.

How I have not written a blog post in almost 2 years? Quite a bit has changed in 2 years.

Those are just the highlights. I’m positive there are tons of other things I cannot think of right now.

In addition I came up with a new URL for this blog, and changed the software it runs on. Hopefully I can start being more consistent with updates again.

Hard to believe facebook is ten today, feels like I just joined yesterday. For their ten year anniversary they created “look back” videos for everyone. The video is pretty simple, shows your first moments, most liked posts, and photos you’ve shared. While simple they are very cool, I especially enjoy seeing my friend’s videos. Brings back a lot of memories. Some happy, some sad, some funny.

View your own video at: http://www.facebook.com/lookback

As the title indicates you can now put your computer to work for you. My co-worker told me about these two new services Gomez Peer and IPUS, both of these services pay you money in order to access your computer’s idle processing time. For people like myself who leave their computers on all the time you could stand to make some quick money. The more computers with the software, the more they do, and the more you get paid!

Almost two weeks ago I ordered a refurbished PS3 from the Sony store. The estimated ship date was July 5th, as of July 10th the PS3 still had not shipped and showed out of stock on the Sony webiste. I decided to cancel my order with Sony and order from CowBoom, I had forgotten about CowBoom even though I bought my iPhone 4 through them.

The order with CowBoom was placed on the 10th, and my PS3 was shipped out by the 12th. My shipment left California at 02:00am Saturday morning, the tracking hasn’t been updated since then. I highly doubt UPS is driving directly from California to Michigan, you think there would be a stop or two between there.

I complained about the tracking not updating on Twitter, and UPS just told me to keep checking the website. You think their internal systems would give a little more detail as to where the package is. I thought about writing a snarky email back, but decided I have better things to do with my time.

Hopefully my shipment comes tomorrow like the tracking says it’s supposed. Otherwise I’ll have delayed my weekend in Grand Rapids for no reason.

So readers, what games should I pick up when my PS3 arrives? 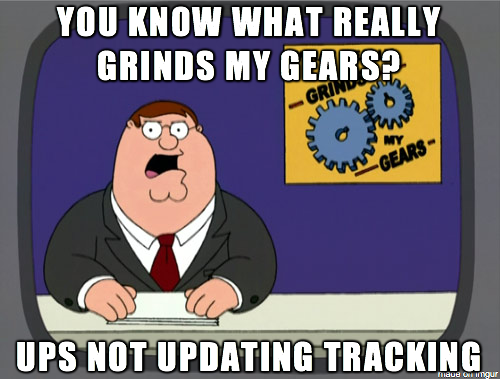